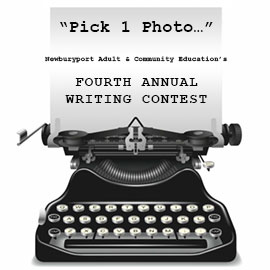 Topic: Pick one of our photos or one from your own collection. Your story will begin wherever your imagination takes you…

What’s Happening to the Moon?
By Susan Reslewic Keatley

As she peered at the sliver of light in the black sky, Delilah wondered why the moon was getting smaller. The matter was especially troubling as she would turn 8 in three days. Would the moon be around that long? ”

“Mommy, what’s happening to the moon? Why is it getting smaller?”
“The moon changes, sweetie. It’s just what happens.”
“Why?”
“Delilah, no more questions! It’s time for bed.”
And after a kiss and a hug, Mommy turned out the lights.
Delilah looked out her window, wondering about the moon. If Mommy couldn’t explain it, she would find somebody who could.

The next morning, she found Daddy in the kitchen.
“Daddy, what’s happening to the moon?”
“Hmmm?” he said, glancing over his newspaper.
“The moon,” Delilah said. “It’s getting smaller!”

“Well, darling,” Daddy began, munching a piece of toast, “the moon is made of green cheese! Didn’t you know? And Martians are taking bites of it, every .. . single . .. night!”

He leaned over, gave her a kiss, and hopped up to grab his briefcase.

Delilah rolled her eyes. Didn’t Daddy realize she was nearly 8 years old? She knew the moon was not made out of green cheese!

At school, she found her teacher in the art nook.
“Miss Helen, what’s happening to the moon?”
“Well, what do you mean, dear?” Miss Helen asked, over the thin glasses resting partway down her nose.
“It’s getting smaller!”
“Oh, Delilah, you don’t learn about the solar system until the sixth grade!” And Miss Helen went back to organizing construction paper cornucopias.

That afternoon, Delilah stormed into her apartment, slammed the door, and threw herself on the couch.
“WHAT’S HAPPENING TO THE MOON?!” she wailed.
“Maybe the people at the Planetarium know,” said her brother Darren.
“The Planetarium?”
“At the museum. Our teacher told us about it today.”
During dinner, Delilah told Mommy she did not want a birthday present, but wanted to go to the Planetarium instead. Mommy agreed to take her, tomorrow, after work.

They raced into the museum at 4:45 PM. They followed the signs that said, “Planetarium: This Way”. When they arrived, it was empty, and quiet. Then, another sign: “Last Show 4:00 PM”. Angry, thick tears filled Delilah’s eyes.
She didn’t hear the clunk-CLUNK clunk-CLUNK of the janitor and his mop bucket. “What’s the matter here?” asked the janitor, surprising her.
“I want to know why the moon is getting smaller. I’ve asked all these people, but no one is taking me seriously!”
“Hmmmm,” said the janitor. “Well, let me try.”

He placed his mop aside, stooped down, and told her all about what was happening to the moon. He rotated a brush around a rag, and rotated all of that around Delilah. Mommy listened too.

The next day, Darren asked, “Mom, what’s an eclipse? I have a quiz tomorrow.”
“Why don’t you ask Delilah?” Mommy offered.
Delilah beamed.
And that night, she said goodbye to the sliver, knowing it would return when she was 8.

Paco, here now in Catemaco for his centenarian grandfather’s funeral, had suggested this place. Well, blame Paco, he thinks with a sigh. After all, it was Paco’s recommendation that brought Caswell to the Posada Koniapan to spend the night before moving on to Coatzacoalcos in search of documents regarding the mysterious violent death of his own maternal grandfather, Raymond Wallace, in that city many years ago. Yes, the hotel gives onto Lake Catemaco, the focal site in this steamy town of lowland southern Mexico. But no, it is not one of those idyllic, breezy resort hotels; it is minimal, barely functional.

Caswell’s room at the Koniapan is sweltering, without air·conditioning, and the advertised breezes and balcony, supposed advantages of the top floor, bring no relief and an army of mosquitoes. As he feels more and more overwhelmed by the stultifying heat, he thinks he is delirious. But for now he will succumb to the dull heaviness which invades his body, hoping that sleep will overtake him before the mosquitoes.

He awakes with a start, groggy and disoriented, and looks from the balcony past the preposterous y dense vegetation to the dominating lake, shimmering in the clear moonlight, almost grotesquely swollen with repeated seasonal rains. Bathed in an atmosphere of torpor, Caswell wonders how this land could have nourished a revolution. Raymond Wallace may have wondered the same thing, he tells himself, but Raymond Wallace was not a cacique, a boss.man; he was a capataz, a foreman, a fore-man.

The racket comes from the Malec6n, not far from the spot where Caswell has been staring at the lake. It is a screaming, exploding, aggressive noise, not some mere irritating constant buzz. It is the pre-funeral revelers, shouting, yelling, blasting music from loudspeakers mounted on top of two or three vans. The focus of the action seems to be right where Paco had indicated La Luna Bar was situated. Caswell can take it no more. He has to take action, break through his instinctual inertia. He manages to get himself dressed and hurries downstairs, to the street and to the Malec6n, his head ringing with the din, the horrifying roars.

It all becomes one huge blur of time and place: the general pandemonium … the mindlessness … the drunken intensity of the crowds … the filthy language … the posturing … the scuffles … the threats … the knives … the punch … the dull throbbing pain … the quick movements of Paco in his Quantico sweatshirt with the sleeves cut off … the hurried exit … the run back to the Koniapan … the police sirens … and the sad look on Paco’s face as he explains that “they just went crazy, locotes, and they just had to meterte chingadazos, mess you up, ’cause, you know, they just saw you as a gringo, and you got to understand, with this funeral, a gringo gave them real bad feelings, because my abuelito, the patriarch, back when he was just a young guy, in the time of the Revolution, he got in a fight with an American boss foreman, and he killed him …”

The Forgotten Photo
By Heather Benoit

I am a forgotten photo.

Being a forgotten photo can be immensely fun. Greeted by laughter and joy,you are once again the focus of your person.

Being a forgotten photo can also be arduous. There are some of us that bear the burden of carrying something precious that has disappeared from our person’s life. In being found, we bring that thing back from the past, often unexpectedly.

When a photo is first created, we bring happiness. We are placed in albums and screen savers, bringing a smile each time our person sees us. Sometimes, however, things change and we instead bring sadness or pain.

Before we are forgotten, many of us are torn to shreds, deleted, burned even. For the lucky ones like myself, we are stashed away, buried in a dusty corner or placed deep in some file folder that our person never accesses.

Then, one day, we are found. Sometimes by accident, sometimes searched out. Usually, this comes with tears of sadness and longing, some times with tears of anger. We are often thrust back into the drawer or box – rumpled, cracked and disfigured.

Time passes and we are pulled out again. Our people are usually gentler now. No longer tears of anger, sometimes tears of happiness or relief that we have been found again. We are often smoothed or printed out, gingerly placed in frames, given to younger people that seem to be connected to our older, wiser, weathered people.

The forgotten photo is not a job for the faint of heart. We endure much. We bring forth many emotions, from elation to devastating sadness. We make the heart ache or heal; we soothe or torture the soul. In just a glance, we return our people to vivid memories that have long been buried away.

What memory did I bring back to my person? I brought her, her wedding day. She is on a raft, hours before her wedding, with her family, friends and her fiance. They are playing and jumping in the ocean. It is a long, long time ago and she is no longer married, although she has a beautiful little girl that came from that marriage.

The first time she found me, she was angry and crumpled me away, into the back corner of an old desk.

The second time she found me, she was sad and put me back, but un-crumpled me and remembered where I was.

The third time, she searched me out. There is a new photo of her daughter with her friends, playing and jumping off that same raft in that same ocean. She searched me out to show me to the little girl that brings her so much joy.